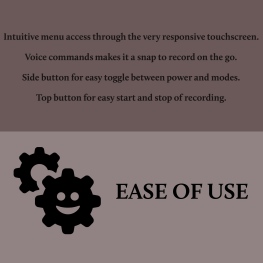 The GoPro Hero 5 Black action camera is small, lightweight camera packed with a lot of sophistication. At just over 4 ounces, this is a luxury item that won’t bog down your pack weight. The short square shape of the camera makes it easy to store in any small easily accessible pocket. Because it’s so small and light weight, it’s also easy to mount it on a trekking pole and capture videos and photos effortlessly using voice commands.

I bought the GoPro about seven months ago before I headed out on the Grand Canyon Rim-to-Rim Hike. I thought it would have a longer battery life (it does not!) and take better pictures and videos than my iPhone (it does!). Having owned for seven months, I’m not sold on the utility of the GoPro. I hardly use it when I’m on the trail. It’s part because you have to buy several mounting contraptions and carry it with you. I don’t like carrying a lot of stuff on the trail, so I just use it as a hand-held camera, so I find it easier to record with my iPhone.

Despite my reluctance to embrace the GoPro, the Hero 5 Black is extremely user-friendly and easy to use. The menus are intuitive and selections are made through a touchscreen. I am pretty technologically inept and I’m usually able to figure most things out within minutes. For additional flexibility, there is a side button to shift camera modes and the top button can start and stop recordings. Voice commands are also a great new feature of the Hero 5, especially if you are doing activities that would not easily lend itself to touching the camera (e.g. rock climbing, bicycling, etc.).

As you would expect from GoPro, the Hero 5 Black comes with a lot of bells and whistles. Some of the upgrades, GoPro made to this camera includes being able to in 4K, GPS capabilities for geotagging photos and video and the Hero 5 is waterproof up to 33 feet without a case. Although the 4K pictures are supposed to be of unparalleled quality, my computers aren’t powerful enough to handle it, so I usually downgrade the quality.

For all the positive features of this camera, there are some big drawbacks. During the upgrade to the Hero 5, the GoPro switched to a USB-C cable. This helps the camera charge and transfer data faster, so now the camera doesn’t support an external microphone without an adapter. The adapter needs to be purchased separately and is probably about half the size of the camera. The built-in sound quality of the Hero 5 is not great, especially if there’s extraneous noise, so you having an external microphone is important for good sound quality. With this version, GoPro extended the rechargeable battery life but the battery is still pretty short-lived. The Hero 5 Black can continuously record up to an hour at 1080p with Wi-Fi, GPS and Bluetooth all turned off. If you use any of these features, the battery will drain quite fast. This is particularly problematic when you’re trying to do time lapse photos. The workaround is to keep the camera attached to the power source, which requires the frame to be off. The Hero 5 Black while waterproof is not scratch resistant. If you’re continuously taking the camera out, be prepared for scratches on the camera. My boyfriend uses the camera extensively and he routinely has to remove the camera from the frame and we’ve scuffed most parts of the GoPro in less than a year.

GoPros warranty on the cameras are fairly limited. If you purchase the camera directly from GoPro, you can return the camera, as long it is without any damage, within 30 days if you’re not 100% satisfied with the camera. After that, GoPro will cover manufacturer defects up to a year from the date of purchase. In either case, customers have to contact the GoPro customer support first to let them determine if the camera is covered under the warranty. GoPro now offers the subscription GoPro Plus service. For $4.99/month, users can get extra protection for their camera – basically replacement of your GoPro for any type of damage no questions asked – along with a range features including auto cloud back up.

There is a new version of the Hero camera out in the market now, the Hero 6 Black, so the price of the Hero 5 has decreased to about $300. You can purchase the camera on the GoPro website, REI (note cameras are not eligible for REI’s one year customer satisfaction guarantee policy) or any other major electronics store.

GoPro is undoubtedly the top of the line action camera! It has a lot of amazing features. Just check out the GoPros Instagram or YouTube account to see the awesome things the camera is capable of doing. However, if you are just looking for a camera that can take a few pictures and short videos while hiking, you probably don’t need this camera. So my recommendation is to pass on the Hero 5 Black unless you have a specific need for an action camera.