This blog is called hiking misadventures for a reason! On our hike up McAfee Knob, the most photographed spot on the Appalachian Trail, I accidentally missed the turn for the AT and hiked up the fire road until the last 1.3 miles to the overlook but this worked in our favor because the climb was gradual and very gentle.

McAfee Knob in Catawaba, VA is nearly four hours away from the DC area. Although the views from the overlook are amazing and well worth the drive, if you are looking to grind out some miles worthy of this long drive, consider combining McAfee Knob with Dragon’s Tooth (south) or Tinker Cliffs (north). We left the DC area shortly after 7:00 AM, a little later than we had planned, so we didn’t get to the McAfee Knob trailhead until about 11 AM, which is in the later range of the prime starting time to hike this very popular trail. So our first challenge was to find parking near the trail head on a holiday weekend. The AT Parking lot on VA 311 fills up pretty quickly (it was full when we arrived!) and sometimes it can be difficult to find parking even in the overflow parking on Old Catawaba Road (there was plenty of spots here).

While the trail is not too challenging, the first quarter mile out of the parking area is steep. You can see yourself well above the road after the first couple of switchbacks. Once you finish the ascent out of the parking lot, the trail will split. Pay attention, if you don’t want to make the same mistake that we did! The AT splits off to the right and goes down and the fire road goes straight and stays pretty level. If you need another clue, it is the opposite direction of the large crowds. If you miss the turn, you’ll still make it to the knob just through a less challenging path. As we were making our way up, I convinced myself the hike felt easier because I didn’t have a 30lb pack as I did when I hiked this trail on my 2014 Appalachian Trail thru hike. Alas, it was just my famous lack of direction instead!

If you want a slightly more picturesque or an easy climb to the knob, make sure to take the fire road. In fact, the majority of hikers we saw were taking the fire road, so you’ll be in good company. While the AT is a little more challenging, it doesn’t offer even the modest views you’ll see on your way up the fire road. The fire road also has several large boulder outcroppings that you can climb as a side adventure.

The fire road took us up the first two miles of the climb. At this point, it met the Appalachian Trail again for the remaining 1.3 miles to the top. This part of the climb is fairly easy. The trail, at this point, does get fairly rocky so pay attention to your footing! Also, if you get a later start as we did, be prepared for the throng of people coming down the trail. Had we taken the Appalachian Trail to the top, we would’ve added an extra .6 miles to our climb.

The McAfee Knob trail is extremely dog-friendly but they do have to be on leash. We saw no shortage of dogs on our hike. Keep in mind some parts of the trail can be muddy, so if you bring a dog, make sure to bring a towel to wipe them down before getting in the car! Our little Sophie, most likely would’ve preferred a ride on one of our backpacks but she made it on her own four legs to the overlook without any problems. She was even an inspiration to some hikers making their way to the top. We often heard, “if that little dog can make it up the trail, so can I.”

The overlook stretches quite far. The largest crowds are near the iconic overhang, a few yards from reaching the overlook. If you want to take a picture here, particularly on a nice day, be prepared to wait in line both to sit on the overhang and for your photographer to take the picture from the other side! A good camera with a great zooming function works best to capture the iconic shot. Although my boyfriend brought his DSLR camera, he decided not to fight the throngs on the other side and decided to try for a wide angle shot but as you can see, it’s not as iconic as one would like it to be. 🙂

Despite the crowds, we were able to find a small part of the overlook to ourselves. We ate lunch, took some additional pictures and just relaxed at the top soaking in the warm spring weather and the pristine views of Catawaba Valley, North Mountain Mountain, Tinker Cliffs and the Roanoke Valley. In all, we spent close to an hour and half at the top. Keeping our long drive back to DC in mind, we reluctantly left the top and made our way down. To make up for our mistake and to try to gain some mileage back, we took the Appalachian Trail back to the parking lot. If you think you can’t go uphill twice to a mountain, think again! There were definitely continuous but short spurts of uphills throughout the way back. It felt cruel to have to do some uphills on the way back down a mountain! I think the short uphills were less challenging and more a reflection of the fact that we were tried and ready to head home after a long day. If you are taking the AT, to or from McAfee Knob, about a mile in (or near the end) you’ll pass some rock outcroppings on the trail. The blazes aren’t marked well in this area, and you may feel like you’re going the wrong way. Rest assured, you’re still on the trail and the drilled in logs can serve as a good guide.

Sophie did well on the return trip and navigated the AT just as skillfully as she’d done on the way up to McAfee Knob. In all, including the hour and a half break at the top, this hike took us 5.5 hours.

If you are looking to incorporate McAfee Knob into a longer hike, you can always add Dragon’s tooth (~ 2 miles south) to the beginning of this hike or Tinker Cliffs (~ 4 miles north) to the end or some such combination. You can also make all there parts a part of a great packing trip (the triple crown of Virginia) and return on the North Mountain Trail, which will be about 37 miles.

Despite our rocky beginning to this hike, the view from McAfee Knob, made our eight hour drive to Catawaba and back well worth it. Even Sophie enjoyed her time sunbathing and people watching at the top! Although she was completely worn out to the point of not even wanting her bacon treats on the ride home! 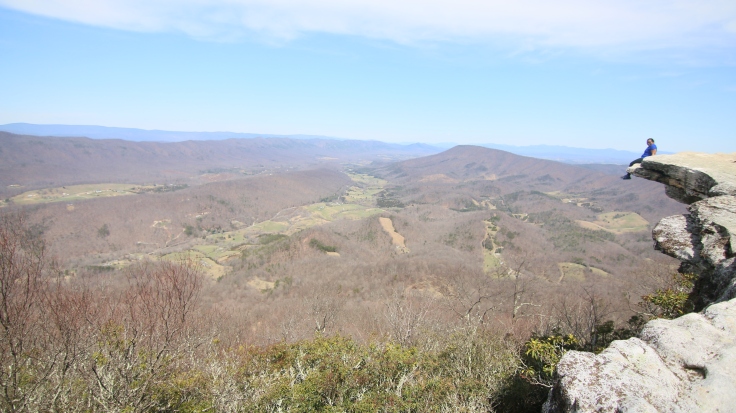 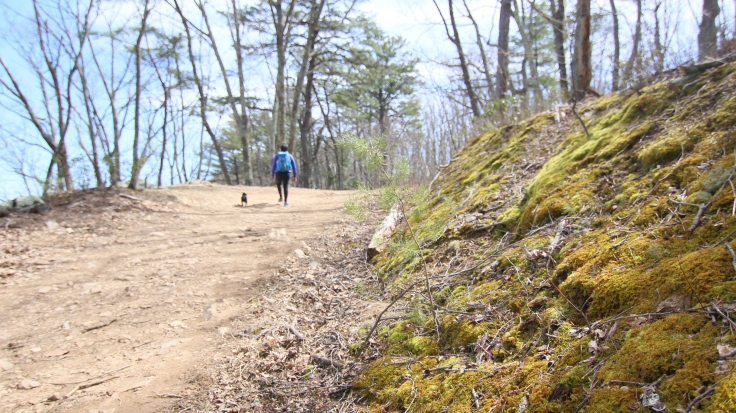